Kerberos relaying with krbrelayx and mitm6

Dirk-jan Mollema published a blog post that shows how an attacker on the same (V)LAN as a machine connected to an active directory where an AD CS server is present can obtain a kerberos ticket to impersonate a domain admin on the victim system: https://dirkjanm.io/relaying-kerberos-over-dns-with-krbrelayx-and-mitm6/
Using the steps outlined, an attacker can execute code with SYSTEM privileges on the victim system.
This post has some further details as to what's going on with this attack.

Reproducing this vulnerability will take 4 machines: 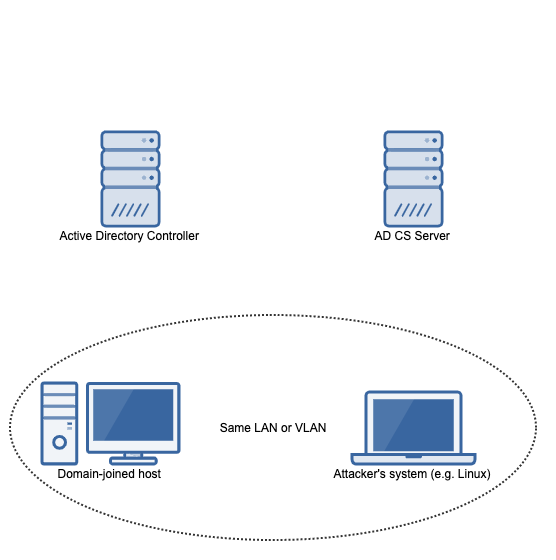 The following software should be present on the attacker's Linux box:

I used a CERT Tapioca VM as the attacker's machine, but that also required that I made sure that IPv6 was enabled, and also that the firewall was disabled on the WAN side:

For the materials in this writeup, the following hosts/domain is used:

The flow of events in this attack can be summarized in the following animation:

mitm6 is a utility that can leverage DHCPv6 to coerce a Windows host on an IPv4 network to use an arbitrary DNS server.

The victim machine asks the LAN if anybody is providing DHCPv6 for settings, including which DNS server to use: 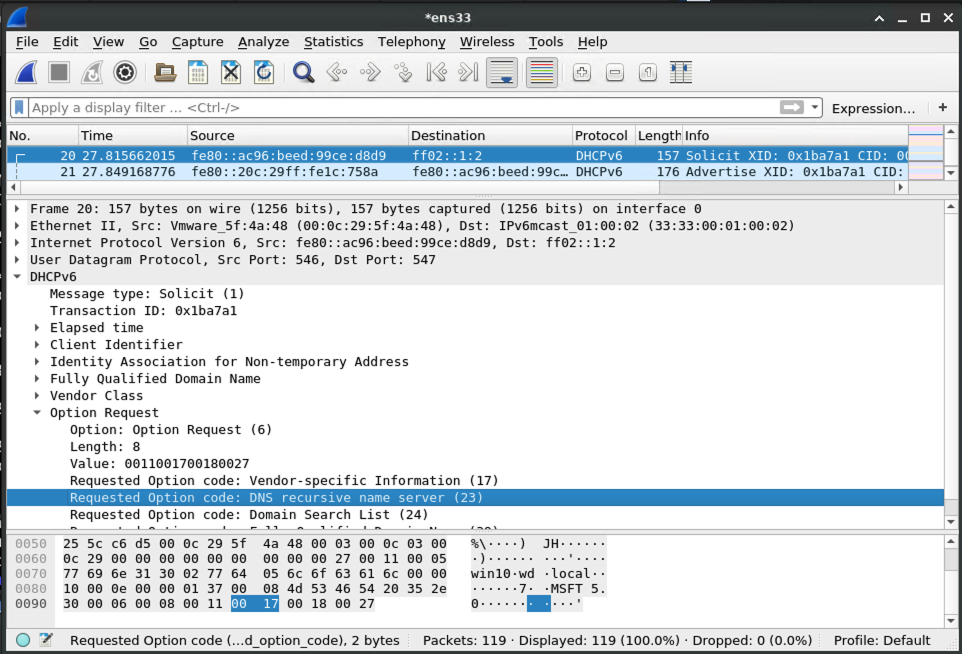 And the machine running mitm6  says to the victim that it should be used for DNS requests: 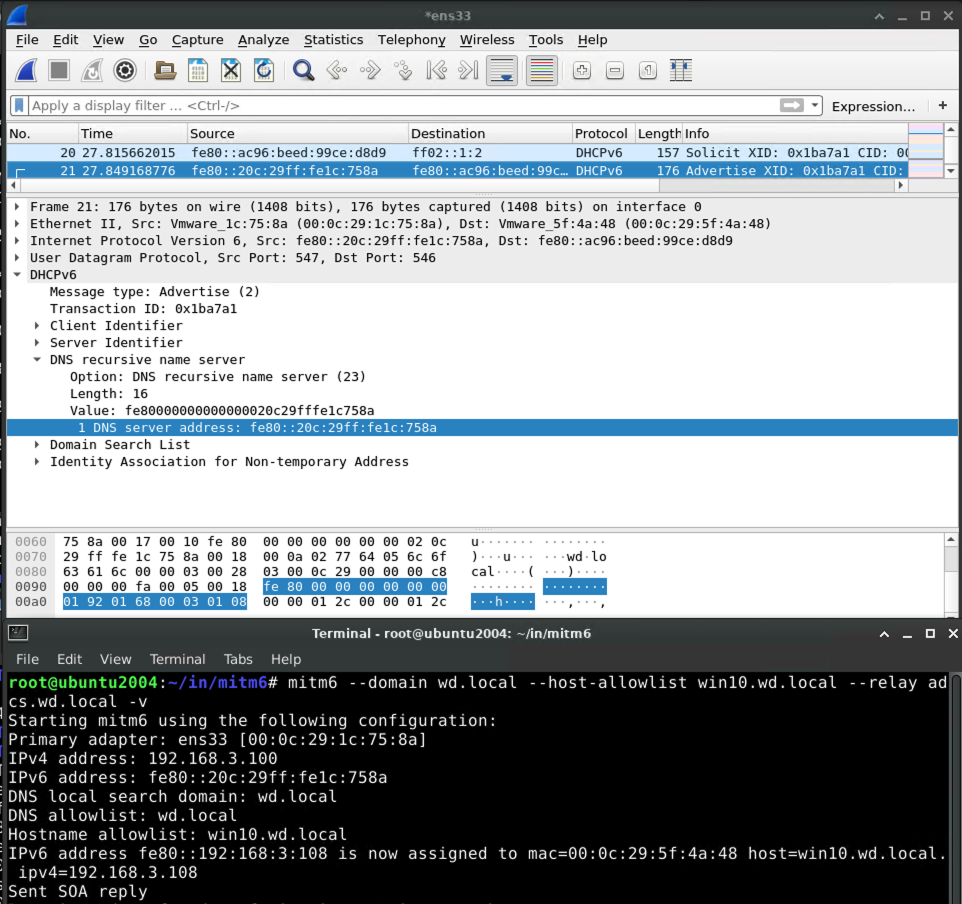 Handling of Dynamic Update from victim

When the victim system attempts to perform a DNS update, e.g. when it first powers on, mitm6  will refuse the update: 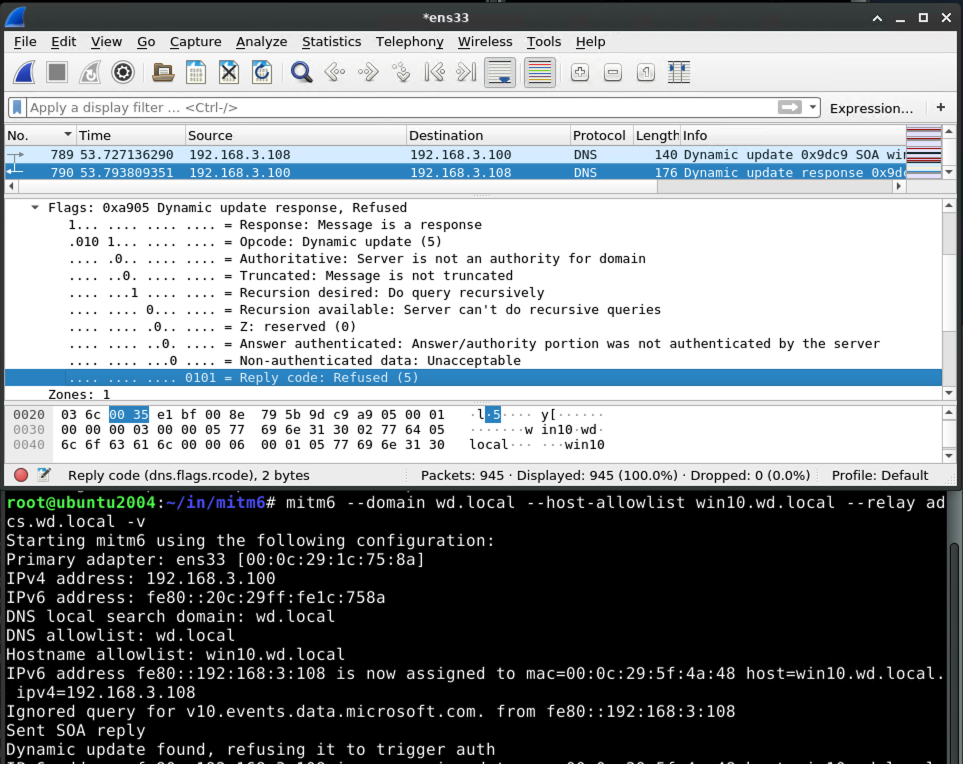 To deal with this refusal, the victim will talk to the domain controller to get a kerberos ticket so that it can try again with authority. 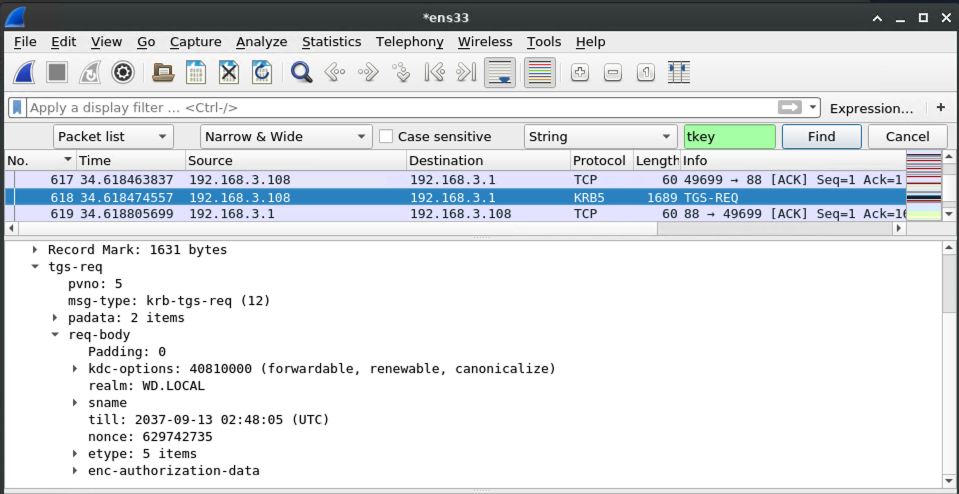 Capturing the kerberos ticket from the authenticated DNS dynamic update

Armed with the kerberos ticket for the victim machine, the victim begins a negotiation with the malicious DNS server to prove that it should be allowed to perform a DNS dynamic update.

Getting a machine account certificate using our kerberos ticket

With a valid kerberos ticket in hand, the request to the AD CS server can be made into an authorized one:

Because the AD CS server answers our request with an HTTP 200, we know that the authorization worked.  So it's time to request a certificate!

Once the AD CS server responds, the certificate is ready, and we can pick it up:

From the perspective of krbrelayx:

We can now use gettgtpkinit.py from PKINITtools to get a TGT using our win10.wd.local  machine account certificate:

Now with this TGT, saved as win10.ccache, we can go one step further to get a ticket for the domain admin account on the victim system, Administrator@wd.local, which we save as admin.ccache.

Now that we have what should be the domain administrator's kerberos ticket, let's try using it with the smbclient.py  utility from impacket.  Note that this strategy assumes that our victim system, win10.wd.local  has a network-accessible share.

We are able to view the contents of the protected windows\system32\config  directory, which a normal user cannot do.

Along these same lines, we can use the same ticket to execute arbitrary code on the victim machine with SYSTEM  privileges by using the smbexec.py script:

Just to keep things together, and not in screenshot form, here are the commands that we used (in order) for our particular experiment:

While not the exact traffic used to obtain the above screenshots, a packet capture of this entire attack chain (and also some irrelevant traffic) is available here:

Relevant hosts in this capture include:

Protecting against this attack

When CERT published VU#405600 about the PetitPotam attack chain on AD CS, we recommended enabling Extended Protection for Authentication (EPA) for AD CS systems.  If you had deployed this mitigation already, congratulations.  You don't have to worry about the attack described above.

Block DHCPv6 and ICMPv6 on networks that only use IPv4

If you have a network where IPv6 is not being used, blocking DHCPv6 and ICMPv6 on all hosts can be used to prevent the mitm6  component of the above attack.  With the Windows firewall, this involves setting the following rules to block: